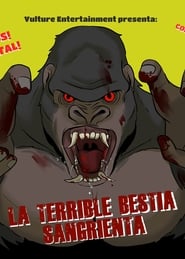 2020 70 min 40 views
A gorilla escapes from a Mexican zoo and goes on a bloody rampage through a small town.
ComedyHorror